The Speeches And Addresses of William McKinley, a signed first edition copy. Octavo, vi, 664pp, [2pp ads]. Blue cloth, title in gilt on spine and front panel. Frontispiece portrait of McKinley with tissue cover. Waterstain along top edge of text block near spine, some evidence of dampstain along top edge of cloth, no damage to text. Yellow end papers, with some wear at hinges. Inscribed by William McKinley to Mr. Samuel Brady Steese: “With the cordial regards of your friend, W. McKinley. Dec 30/93.”

Comments: Samuel Brady Steese was a veteran of the Civil War and a local politician in Ohio. His son in law, John K. Richards, was a close acquaintance of Ohio Governor and future President William McKinley. McKinley appointed Richards to the post of Attorney Governor of Ohio from 1892-1896, then Solicitor General of the United States from 1897-1903. 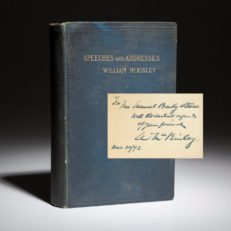 You're viewing: Speeches And Addresses – From His Election To Congress To The Present Time $2,800.00
Add to cart