First edition of Stuart Symington: Portrait of a Man with a Mission by Paul I. Wellman, signed by Senator Stuart Symington to the first female Treasurer of the United States, Georgia Neese Clark Gray.

Senator Symington and United States Treasurer Georgia Gray were both members of the Truman administration. Gray was an early supporter of Symington’s 1960 democratic presidential bid versus John F. Kennedy, which he quickly abandoned. Stuart Symington served as the first United States Secretary of the Air Force, then as Senator from Missouri from 1953 – 1976. 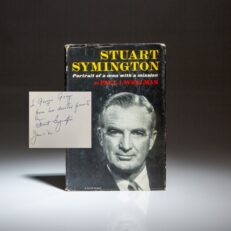