The Book Of Common Prayer

The Book of Common Prayer, with an exceptional inscription by President Gerald R. Ford.

The famous phrase “I would rather walk a thousand miles for peace than to have to take a single step for war” was first spoken by President Gerald Ford at an Air Force commissioning ceremony in Arizona. It was subsequently used the following week as Ford departed for Japan, becoming the first president to make an official trip to the island nation and marking Ford’s first trip as president. During the trip, President Ford met with Emperor Hirohito and worked to improve trade relations. The now-famous phrase was used a couple of times during the trip, upon departure from the South Lawn of the White House and at the Japan Press Club. 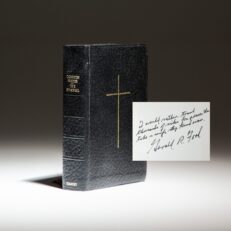