First edition of The FBI Pyramid, signed by Mark Felt, the notorious Deep Throat of Watergate.

In 2005, it was revealed that author Mark Felt was indeed “Deep Throat,” the anonymous source for journalists Bob Woodward and Carl Bernstein during the Watergate Investigation. It had been speculated for years that he was the anonymous source, including speculation by Nixon himself. As Associate Director of the FBI in the early 1970s, he was privy to all information about the FBI investigation of the Watergate break-in. Felt passed away in 2008. 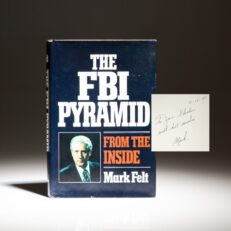