The Iraq Study Group was formed in March of 2006 by the United States Congress to evaluate the situation in Iraq and make policy recommendations on the way forward. The group was led by former Secretary of State James Baker and democratic congressman, Lee H. Hamilton. It was also known as the Baker-Hamilton Commission. 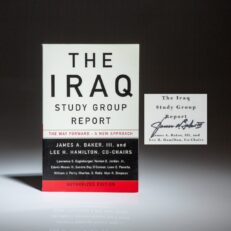