This copy is inscribed to General John A. Wickham, Jr., the Army Chief of Staff from 1983-1987. When this book was inscribed to Gen. Wickham, he was serving as the commander of the Eighth Army, based in South Korea to ensure stability on the Korean Peninsula. General Matthew B. Ridgway (1895-1993) served as the commander of the 82nd Airborne Division during World War II. After his notable Allied victories in the Italian Campaign and the Battle of Normandy, Ridgway took command of the XVIII Airborne Corps. He commanded the corps in the Battle of the Bulge, Operation Varsity and the overall Western Allied invasion of Germany. After the war, he served as Supreme Allied Commander Europe (1952-1953), the Army Chief of Staff (1953-1955) and as a member of the “Wise Men” group, advising President Johnson on the Vietnam War. 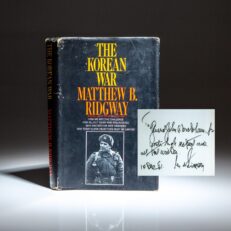