Complete set of The Liberation Trilogy by Rick Atkinson, signed by the author, from The Easton Press.

Octavo, [three volumes]. Bound in full leather, titles in gilt, raised bands with decorative gilt compartments. Silk endpapers, all gilt leaf ends, silk bookmarks, in each volume. All volumes in fine condition. Volume III is signed by the author, Rick Atkinson, with associated paperwork from the publisher. A fine set.

The Liberation Trilogy by Rick Atkinson follows the United States’ buildup and involvement in World War II. The first volume, An Army at Dawn: The War in North Africa, 1942-1943, was first published by Henry Holt and Company in 2002. It won the Pulitzer Prize for History in 2003. The other two volumes, The Day of Battle: The War in Sicily and Italy, 1943-1944 and The Guns at Last Light: The War in Western Europe, 1944-1945, were both New York Times bestsellers. 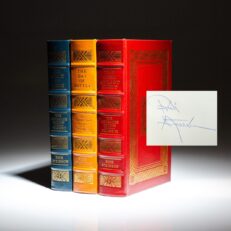 You're viewing: The Liberation Trilogy $675.00
Add to cart