The Life And Times Of Aaron Burr

Signed by President Franklin Pierce, the Life and Times of Aaron Burr by J. Parton.

President Franklin Pierce served one term as the 14th President of the United States, from 1853-1857. His support of the Kansas-Nebraska Act sealed his political fate and the Democratic Party dropped him in 1856. He became a vocal critic of President Abraham Lincoln at the onset of the Civil War, which made him unpopular amongst many northerners. He died in 1869. 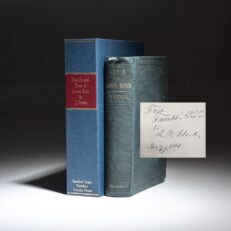