Octavo, [two volumes], each is 940pp. Maroon leather, title in gilt on spines, recipient’s name in gilt on front cover. All edges gilt, silk bookmarks. Maroon endpapers. Both volumes appear used, but free of any marks or notations. Each volume is signed by both Jimmy Carter and Rosalynn Carter. Each volume contains a laid-in provenance card, individually signed by President Carter or Rosalynn Carter.

The card for President Carter states: “This Bible was owned and used by me. J. Carter.”

The card for Rosalynn Carter: “This Message Bible was owned and used by me! Rosalynn Carter September 22, 2006.” An exceptional piece of presidential history.

Former President Jimmy Carter began teaching Sunday School in Plains, GA, after returning home from the Navy. His father, Earl Carter, had done the same when Carter was a child. While in Washington, President Carter would teach Sunday School a few times per year at the Washington First Baptist Church, without informing the public. After his time in the White House, he returned to Plains and joined the Maranatha Baptist Church. While there are only 30 active members of his church, his Sunday School teachings draw visitors from around the world. 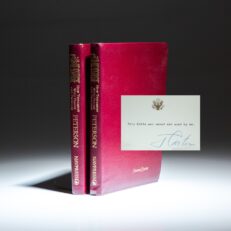