The Protection of Freedom – An Address by Herbert Hoover.

Limited edition of The Protection of Freedom, signed by President Herbert Hoover.

There were 28 copies of this book commissioned and published by Admiral Ben Moreell, the Chairman of the Task Force on Water Resources and Power. The leather-bound booklet was sent to President Hoover in September of 1954 and was signed by “The Chief.” Copies of the documents from the Hoover Library detailing the provenance of the booklet are included.

An exceptionally scarce limited edition copy of this important speech by President Hoover.

This speech was included in Addresses Upon the American Road, published by Stanford University in 1955. It was delivered at a reception honoring his 80th Birthday in West Branch, Iowa on August 10th, 1954. 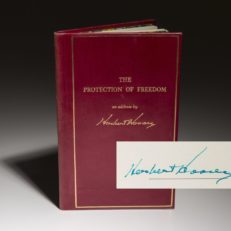 You're viewing: The Protection of Freedom – An Address by Herbert Hoover. $1,250.00
Add to cart