Presentation copy of The Stone Church at Kawaiahao to Fleet Admiral Chester Nimitz, with his notes and signature.

The Kawaiahao Stone Church of Honolulu is known as the Westminster Abbey of the Hawaiian Islands, being the second oldest church in the state. Fleet Admiral Chester Nimitz (1885-1966) was the Commander in Chief of the U.S. Pacific Fleet during WWII, stationed in Honolulu. On September 2, 1945, he was the United States signatory to the surrender terms of Japanese forces, aboard the USS Missouri in Tokyo Bay. After WWII, Nimitz served two years as Chief of Naval Operations. He retired from active service in 1947 and moved to California. Admiral Nimitz died in 1966 and was buried at Golden Gate National Cemetery in San Bruno, California. 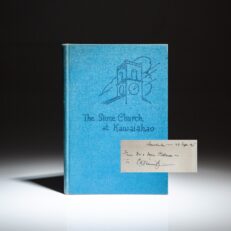