× Ask a Question re: They Called Him CHAMP – The story of CHAMP SEGAL and his fabulous era
SKU: 1345 Categories: Father's Day, Holiday Gifts, Sports 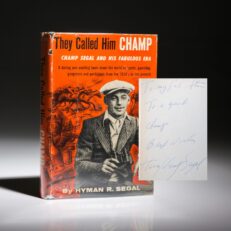 You're viewing: They Called Him CHAMP – The story of CHAMP SEGAL and his fabulous era $395.00
Add to cart