To Seek A Newer World

× Ask a Question re: To Seek A Newer World
SKU: 10954 Category: Kennedy Family

Eunice Kennedy Shriver founded the Special Olympics in 1968. In 1953, she married Sargent Shriver, who became an active member of the Kennedy administration and Democratic nominee for vice president in 1972. She was awarded the Presidential Medal of Freedom in 1984 for her work on behalf of children with disabilities. She passed away in 2009. 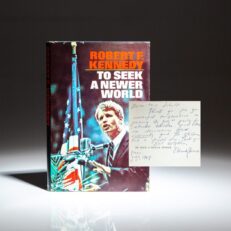