Octavo, 287pp. Blue morocco, title in gilt on spine, raised bands. Marbled endpapers, all edges gilt, silk page marker. Light scuff mark to spine, otherwise fine. Housed in the deluxe edition slipcase, lined in felt, marbled boards, a near fine example. Binding by the St. Crispin Bindery in New York, with embossed seal on rear flyleaf. This copy is inscribed by Eunice Kennedy Shriver: “To Mr. and Mrs. Starr / With my thanks for all the wonderful places you took us in Madrid, and the many kindnesses. Eunice Kennedy Shriver.” Additional signatures by Sargent Shriver, Maria Shriver, Bobby Shriver and Timothy Shriver.

Published shortly after the death of President Kennedy, all proceeds from this publication went to establish the John F. Kennedy Memorial Award in biography and history. This deluxe limited edition was bound in full blue morocco by the St. Crispin Bindery of New York, for the personal use and distribution of the Kennedy family. There are a handful of known copies signed by Jackie Kennedy, Robert F. Kennedy and Ted Kennedy. Eunice Kennedy Shriver (1921-2009) founded the Special Olympics in 1968. In 1953, she married Sargent Shriver, who became an active member of the Kennedy administration and Democratic nominee for vice president in 1972. She was awarded the Presidential Medal of Freedom in 1984 for her work on behalf of children with disabilities. She passed away in 2009. 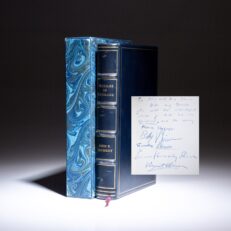