× Ask a Question re: Up ‘Til Now
SKU: 11810 Categories: Presidential Candidates, U.S. History

First edition of Up ‘Til Now, A Memoir, signed by Senator Eugene McCarthy.

Senator Eugene McCarthy (1916-2005) represented the state of Minnesota in the House and Senate from 1949-1971. He sought the presidency 5 times, on multiple party platforms. In retirement he was an author, poet and syndicated columnist. 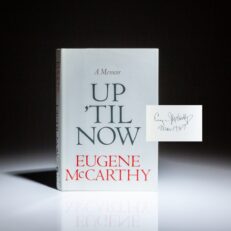