At the Center of the Storm: My Years at the CIA – With Bill Harlow

× Ask a Question re: At the Center of the Storm: My Years at the CIA – With Bill Harlow
SKU: 1508 Categories: Law, United States Politics, William J. Clinton

Signed copy of At The Center of the Storm, inscribed by George Tenet to Jack Valenti, Special Assistant to President Lyndon Johnson and president of the Motion Picture Association of America. Octavo, xxii, 549pp. Black hardcover, title in gilt on spine. Stated “first edition” on copyright page with full number line at bottom. In publishers dust jacket, $30.00 on front flap, near fine with faint shelf wear. Inscribed by CIA Director George Tenet to Jack Valenti on half title. Inscription reads: “Dear Jack & Mary Margaret, It is your love and support that gave me the courage to write this book. I only hope it lives up to Valenti standards. Stephanie and I are blessed with your friendship forever. Love George.” An exceptional association copy.

Comments: Jack Valenti was a Special Advisor to President Lyndon Johnson from 1964-1966. His wife, Mary Margaret Valenti, was a personal secretary of Senator Johnson from 1956-1962. Jack Valenti was in Dallas in November, 1963 and can be seen in the famous photograph of President Johnson being sworn in aboard Air Force One, next to Mrs. Johnson. Jack Valenti would go on to become the President of the Motion Picture Association of America. George Tenet was the Director of Central Intelligence during the Clinton and George W. Bush administrations, serving through the September 11th terrorist attacks and the Iraq War. 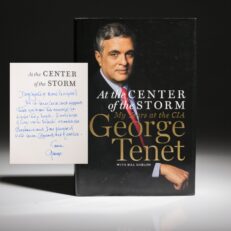