Signed on the half-title: “For The Honorable Carl Vinson – with admiration and high esteem to a statesman who has effectively interested himself for more than three decades in the security of our country. From his friend, Dwight D. Eisenhower.” An exceptional association copy, which was gifted to Vinson’s Pentagon liaison from the Air Force in 1964, then passed down through the family.

This signed copy of Crusade in Europe was set aside to be inscribed by General Eisenhower, with records from the Eisenhower Library showing that Rep. Carl Vinson and his entire committee received personalized copies. Representative Carl Vinson (1883-1981) served for more than 50 years in the House of Representatives. As chairman of the powerful House Armed Services Committee, he was called “the Father of the Two-Ocean Navy,” as he was responsible for the expansion of the United States Navy in the buildup to World War II. Vinson worked closely with Eisenhower in the years following World War II, continuing to advocate for military preparedness. For his contributions to the nation, the USS Carl Vinson was named in his honor, being christened in 1980. 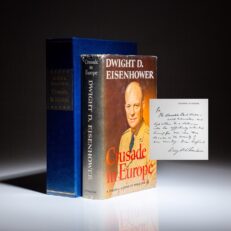