By Fleet Admiral Chester W. Nimitz, this is the story of Drake’s Cove at Point Reyes National Seashore. This copy is inscribed by Admiral Nimitz.

Octavo, [18pp]. Blue cloth, title stamped in gilt on spine. Light sunning to spine, wear to cloth along top edge, dampstain to outer fore-edge of text block. Frontispiece portrait of Sir Francis Drake, with numerous black and white illustrations in the text. Not issued with a dust jacket. This copy is inscribed on the title page: “To Paul and Esther Newell – with best wishes – C.W. Nimitz, Fleet Admiral, USN.” Nimitz was the honorary chairman of the Drake Navigators Guild.

Drake’s Cove, so named by Admiral Nimitz, was called Portus Novae Albionis ? the Port of New England, by English explorer Sir Francis Drake. Drake spent two months at Drake’s Bay in 1579, repairing his ship, the Golden Hind, on his circumnavigation of the globe. Fleet Admiral Chester Nimitz (1885-1966) was the Commander in Chief of the U.S. Pacific Fleet during WWII, stationed in Honolulu. On September 2, 1945, he was the United States signatory to the surrender terms of Japanese forces, aboard the USS Missouri in Tokyo Bay. After WWII, Nimitz served two years as Chief of Naval Operations. He retired from active service in 1947 and moved to California. Admiral Nimitz died in 1966 and was buried at Golden Gate National Cemetery in San Bruno, California. 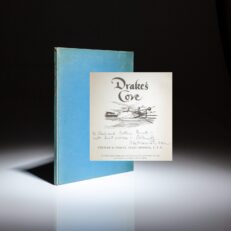