President Franklin Roosevelt was an avid collector of miniature books, a hobby which began in the 1920s and continued throughout his presidency. A complete list of his collection does not exist, since the books were located at the White House, Hyde Park and Campobello Island. After his death in 1945, his collection was divided up between members of the family and the National Park Service at Hyde Park. The first part of the collection was sold at auction in 1951 by Hammer Galleries of New York. At the estate sale for Eleanor Roosevelt in 1964, additional miniature books were sold at auction. (The Microbibliophile, Volume XXXVII, Number 1, Issue 211, January 2018). 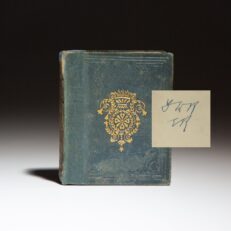