Portrait of the Assassin

First edition of Portrait of the Assassin, inscribed by Gerald R. Ford to fellow member of the Warren Commission and former Director of the CIA, Allen Dulles.

Octavo, 508pp. Red cloth, gilt title on spine. Stated “first printing” on copyright page. Top edge blue, clean pages. Publisher’s dust jacket in fine condition, $6.95 price on front flap. Housed in blue cloth clamshell box. Inscribed on the front free endpaper: “To Allen Dulles for whom I have the greatest admiration. I know of no person who has served his nation so well and with such dedication. / It has been a real privilege to work with you and to know you. / Warmest personal regards, Gerald R. Ford.” An exceptional association copy.

Shortly after the death of President John F. Kennedy, President Lyndon Johnson asked Chief Justice Earl Warren to head a presidential commission investigating the assassination of the president. What was formally known as the President’s Commission quickly became known as the Warren Commission.  Johnson asked a total of 7 people to serve on the commission, including the former Director of the CIA, Allen Dulles, and Michigan Representative Gerald R. Ford. The participation of Allen Dulles was criticized because of his relationship with John F. Kennedy (he was fired in 1961) and because of his ties to the CIA. Gerald R. Ford would go on to serve as President of the United States but would spend the rest of his life defending the lone gunman theory of the Warren Commission. 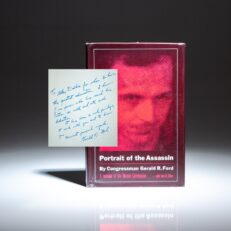