Inscribed on the half-title to Diane Sawyer’s grandmother: “To Nora Dunagan, With appreciation for the outstanding contribution of her granddaughter Dianne [sic] – to this volume. From Richard Nixon.”

In 1970, Diane Sawyer moved to Washington DC to pursue a career in broadcast journalism. She interviewed with Jerry Warren, White House deputy press secretary, and was hired to help draft presidential statements. She eventually rose to become a staff assistant to President Nixon, and followed him to California after his resignation in 1974. She helped him write his memoirs, which were published in 1978. Sawyer’s grandmother, Nora Belle Dunagan, died in 1982. This book is from her estate. 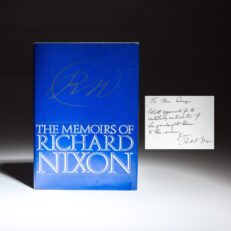 You're viewing: The Memoirs of Richard Nixon $450.00
Add to cart