The Strength of Government

Association copy between the chief architects of the Vietnam War. First edition of The Strength of Government by National Security Advisor McGeorge Bundy, inscribed to the Secretary of Defense Robert McNamara.

Inscribed on the half-title: “For Bob McNamara – With affectionate recognition that if he had not proved most of it in action, this whole argument would have been very hard to believe, even for his admiring friend. Mac Bundy. Nov. 20, 1968.”

In The Strength of Government, former National Security Advisor McGeorge Bundy argues that the national government is dangerously weak for the job assigned to it by the American people. He believes the rapid changes in communication and technology place an increased burden on the federal government that it is not equipped to handle. In the view of Bundy, the Executive Branch is dangerously weak, with certain departments being held together by “an administrator of truly exceptional force and skill,” such as the recipient of this book, Secretary of Defense Robert McNamara.

McGeorge Bundy served as the National Security Advisor for Presidents John F. Kennedy and Lyndon Johnson from 1961-1966. Later in life, he joined McNamara as a member of the “Gang of Four,” advising the Executive Branch on nuclear policy. Bundy died in 1996. 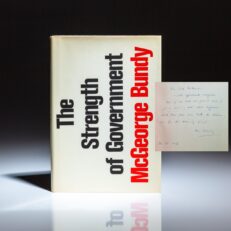