President Carter struggled to combat inflation during his 4-year presidency. With the energy crisis of 1979, fuel prices rose dramatically and so did inflation. Inflation rates hit 13.5% in 1980, the highest level in decades. In this letter to Senate Minority Leader Baker, a Republican, President Carter notes that inflation “transcends partisan political considerations.” Soon after this letter, Carter would announce that the economy had slipped into recession. With 1980 being an election year and the economy in recession, the reelection hopes of President Carter were dashed. Ronald Reagan would inherit the economic issues of the late 1970s. 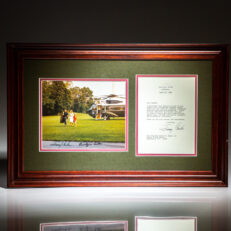