Octavo, 222pp. Dark blue hardcover, title in silver. First edition in English, with first edition appearing in Russian. In publisher’s fine dust jacket. Inscribed opposite the title page: “To Brent – with great respect and a hope that we will be able to cut (or untie?) Gordian knots in arms control for the benefit of our two nations and humanity. Henry Trofimenko. Washington, D.C. Dec. 3, 1986.” A unique inscription considering the recent collapse of the Reykjavik Summit the previous month between President Reagan and Mikhail Gorbachev. 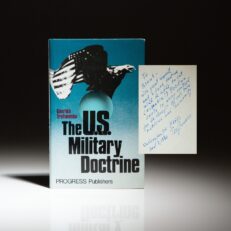