Note is written on a White House gift card, measures 4.25″ x 2.25″, with associated envelope. Embossed seal of the president on front panel. Includes a note from Ann C. Whitman, personal secretary to President Eisenhower, imploring Bryce Harlow to “deliver [the note] carefully, but I would not blame you if you read en route.” The note from President Eisenhower reads: “Dear Mrs. Harlow, These are just to ask your help in making your husband understand how much I admire his effectiveness in working with the members of Congress and appreciate his devotion to his difficult task. With affectionate regard. D.E.” This note likely accompanied a gift from President Eisenhower.

Bryce N. Harlow (1916 – 1987) began his career in the executive branch serving as an administrative assistant, speechwriter and deputy assistant for congressional affairs in the Eisenhower Administration. During the campaign of 1960, he was a speechwriter for Vice President Nixon’s unsuccessful presidential campaign. With Nixon’s election In 1968, Harlow was the first presidential appointment of the new administration, serving as a congressional liaison. Harlow was awarded the Presidential Medal of Freedom in 1981 by President Ronald Reagan. He died in 1987. 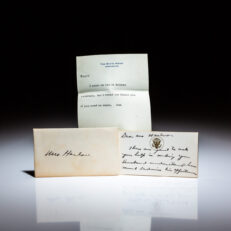