This typed letter is on United States Senate stationery and dated May 29, 1954. Addressed to the Democratic National Committee in Washington DC, Kennedy is thanking Mr. Moore for his recent letter and kind remarks. This is not a secretarial inscription. The letter is signed in Senator John F. Kennedy’s own hand.

Robert M. Moore worked for the Democratic National Committee, serving as Assistant to the Chairman, Mr. William M. Boyle. Mr. Moore was a lifelong acquaintance of Harry Truman, being raised in Missouri and a member of the Missouri Democratic delegation. He died unexpectedly in 1964. 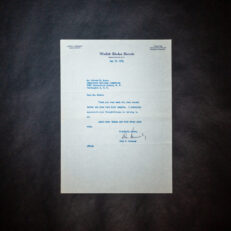